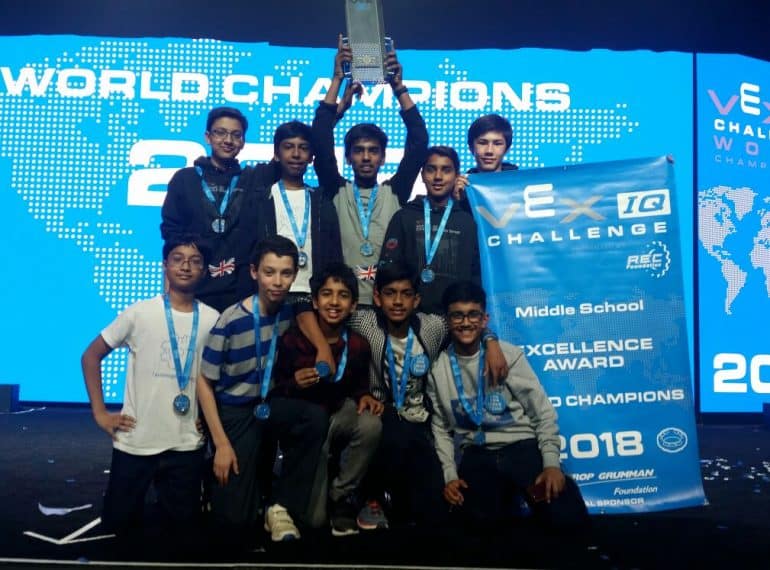 QE is the first UK school ever to win a world title in the Vex IQ Challenge international robotics finals.

The QE pupils emerged to take the Excellence Award at the finals in Louisville, Kentucky, which holds a Guinness World Record as the world’s largest robotics competition. The Excellence award is the highest presented in the VEX IQ programme, going to the team that exemplifies overall excellence in building a high-quality robotics programme. 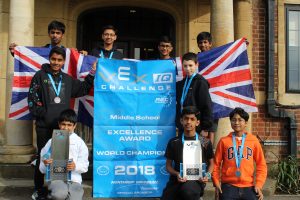 They saw off no fewer than 400 teams from 40 countries – including leading schools from the US and China which have usually provided the winners throughout the competition’s 11-year history. It was only the second year that boys at QE had participated in VEX Robotics, having become UK national champions during their first season in 2017.

The QE boys were judged on their robot design, programming skills, driving skills and STEM (Science, Technology, Engineering & Mathematics) research project, with all of the judges in their division agreeing they were the overall ‘best of the best’.

QE’s Head of Technology, Michael Noonan, said: “This is a truly phenomenal achievement and far surpasses all our expectations. It is a hugely competitive event, which attracts some of the most intelligent young minds in the world. The Year 9 Gear Squad team were especially commended and, together with our Year 8 Technogear team, demonstrated a voracious hunger for success whilst retaining their humility. 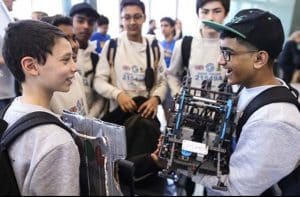 “Gear Squad and Technogear greatly impressed the judges with their confident and student-led presentations and explanations. In fact, the most notable aspect of the VEX IQ programme at Queen Elizabeth’s is that it is entirely student-led.

“I am absolutely delighted and infinitely proud of the students involved, and this marks the ultimate testament to their hard work, dedication and countless hours refining their robotic solutions and programmes.”

It is estimated that there are 8,500 VEX IQ teams around the world. The VEX IQ challenge is aimed at pupils from Years 5-9.

Year 9 pupil Dillan Shah, of Gear Squad, said: “It was an honour to represent the UK as well as our School and meet all the fabulous people from around the world. It was a truly amazing experience.” 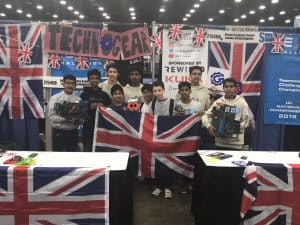 Despite nationwide challenges in getting young people to pursue STEM careers, QE and other teams taking part from the UK showed that British pupils can not only compete but be leaders in this field, supported in their preparations by both curricular and extra-curricular programmes, said the organisers. In fact, QE is ranked in the top ten UK schools for take-up and performance in the STEM subjects, and no fewer than 22 of last year’s leavers went on to read Engineering at university.

Bridie Gaynor, VEX Robotics Competition Manager (UK & Europe), said: “We are extremely proud of the work VEX Robotics does in the UK to encourage not only a passion for robotics but also much sought-after skills. To see Queen Elizabeth’s School, a UK team, on stage accepting the Excellence Award was a truly landmark moment for VEX Robotics in the UK. We are so proud that UK teams are now a force to be reckoned with.”

The 400 teams taking part were split into five divisions of 80. The VEX IQ competition is multi-faceted: in addition to the overall Excellence Award, within each division there were prizes for categories such as the STEM research project, design booklet competition, teamwork challenge and robot skills competition. 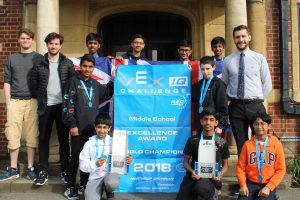 Mr Noonan added that the criteria for winning the Excellence Award included being “a shining example of dedication, devotion, hard work and teamwork”. The award took into account the performance and subsequent rankings of the winners in all competitions within the overall event, but was ultimately decided by interviews from the chief judges. He added that it was clear that both QE teams benefited from being pupil-led “as they demonstrated an outstanding amount of independence at the world stage in solving problems and performing to their optimum”.