Back on top! Stapylton regain their title as QE’s leading House after a year of competition

Academic enrichment > News & Events > News > Back on top! Stapylton regain their title as QE’s leading House after a year of competition 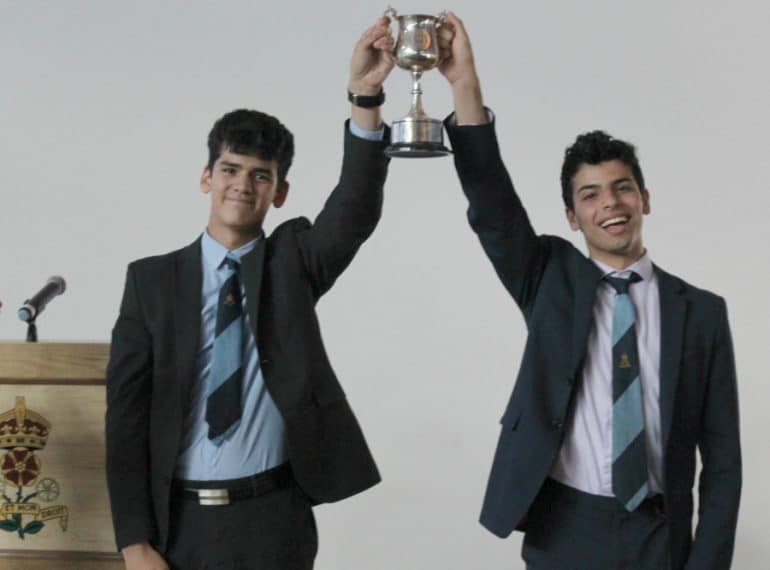 Stapylton House are the winners of the 2017/18 House Cup – reclaiming the coveted trophy from last year’s champions, Underne.

Stapylton’s victory means this House has now won the trophy – formally the Eric Shearly Memorial Cup – for three of the last four years.

The triumph was announced at the end-of-year House assembly, where the cup was presented to House Captain Oliver Than-Lu and his Deputy, Omar Taymani, both from Year 12 (pictured above).

Headmaster Neil Enright said: “My congratulations go to all Stapylton boys: this victory reflects their consistency of achievement in extra-curricular enrichment activities across the academic year, with the older boys’ efforts being boosted by a particularly strong Year 7 cohort. I trust that boys in other Houses will be inspired to redouble their efforts next year to challenge Stapylton for the crown.”

The assembly celebrated outstanding performances over a wide range of fields, including the performing arts, sport and charity work.

For this year’s House Drama competition, participants were challenged to produce original plays on the theme of a dystopian future: Leicester won the competition for the third consecutive year.

The House Music competition was won by Pearce.

In chess, the winners of various competitions were honoured, as were the boys chosen to receive junior, intermediate and senior colours.

Similarly, the assembly highlighted the names of boys who had won colours for music and sports.

There was a review of performances in sport throughout the year, including cricket, rugby, water polo, swimming and athletics. One innovation was the announcement of ‘teams of the year’ for cricket and rugby, which included leading performers from all year groups.

House charity fund-raising events during the year were celebrated, together with the work done to support the Sri Sathya Sai English Medium School in Kerala, India, with which QE has enjoyed a longstanding partnership.

Participation in The Duke of Edinburgh Award at QE remains strong: 100 boys from Year 10 enrolled for the bronze award in October and are due to complete their Qualifying Expedition in August, it was announced, while 34 Year 11 pupils signed up for the silver award and 18 Year 12 boys for the gold.

The assembly also recounted details of: